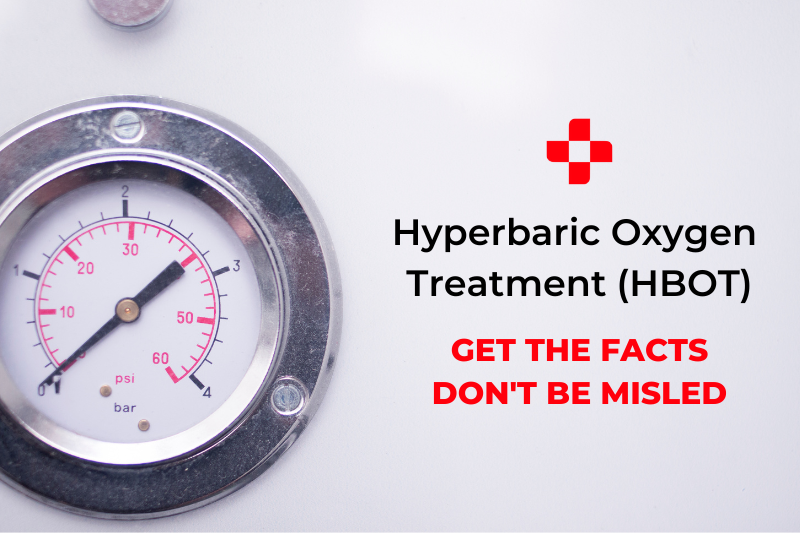 Medical Hyperbaric Oxygen Treatment is accepted for reimbursement by Health Insurers in Ireland and internationally.

This cover is provided because of proven efficacy for approved conditions.

The studies which proved beneficial outcomes are all based on internationally-accepted medical treatment protocols:

There are significant differences between approved medical treatment protocols and the types of “hyperbaric” “treatment” offered by non-medical lay practitioners – so-called “mild HBOT” – which may be promoted with non-validated or preliminary studies or articles, and which may mis-state scientific findings for commercial purposes.

In order to show the measured differences in physiological response in patients undergoing medical hyperbaric oxygen treatment versus “mild HBOT”, the following graphs show actual measurements of transcutaneous oxygen level that are physiologically achievable during treatment in the pressure chamber under the different scenarios.

These measurements are carried out using a Perimed Periflux 6000 device – modified for in-chamber operation. (Oxycare is the only Irish hyperbaric oxygen treatment centre which can carry out these in-chamber measurements). 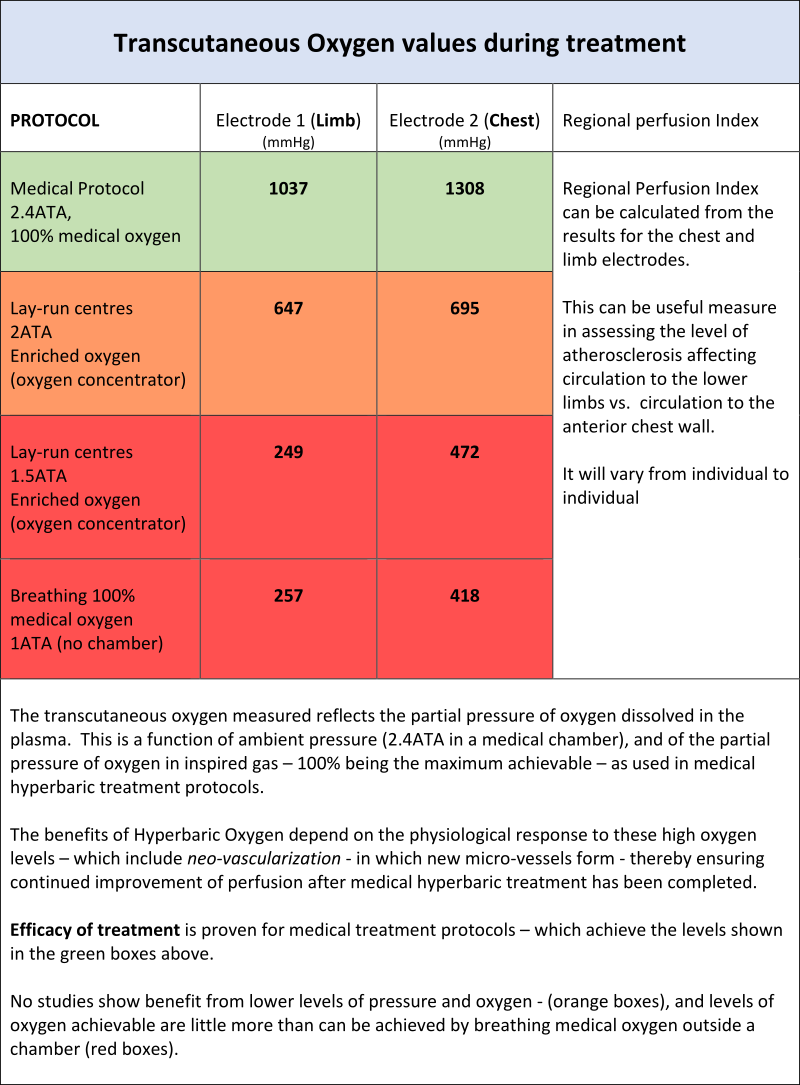 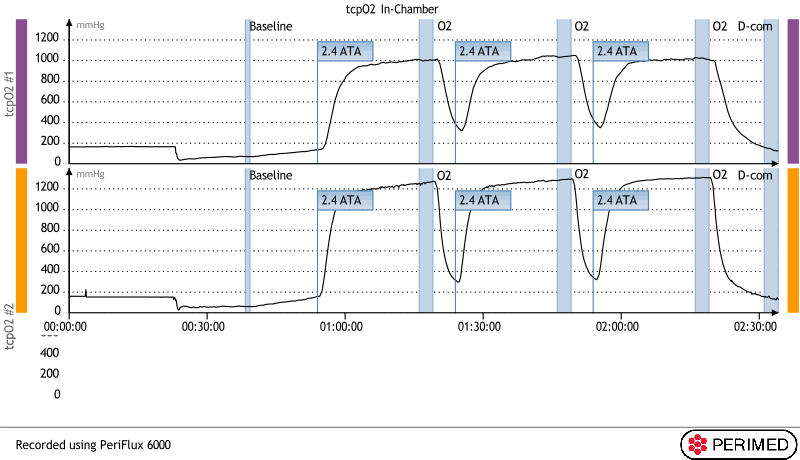 Chambers that Only Achieve 2 ATA (atmospheres absolute ) compressed to a depth of 10 meters (33 Feet of Seawater) 695mmHg will NOT have the clinical Efficacy and Outcomes of 2.4ATA with medical Oxygen

These Chambers are not Classed as Class IIb Medical Devices. 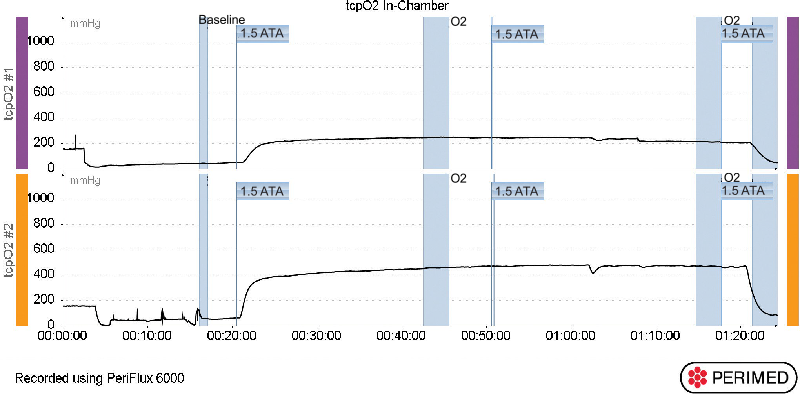 Chambers that can only Achieve 1.5 ATA (atmospheres absolute)
(Soft or Mild Hyperbaric Chambers)

Soft chamber treatments are FDA approved for acute mountain sickness only. Mild hyperbaric exposures with air delivery (enriched oxygen through a concentrator) deliver no more oxygen to the body than breathing medical oxygen by mask at sea-level pressure (no chamber). 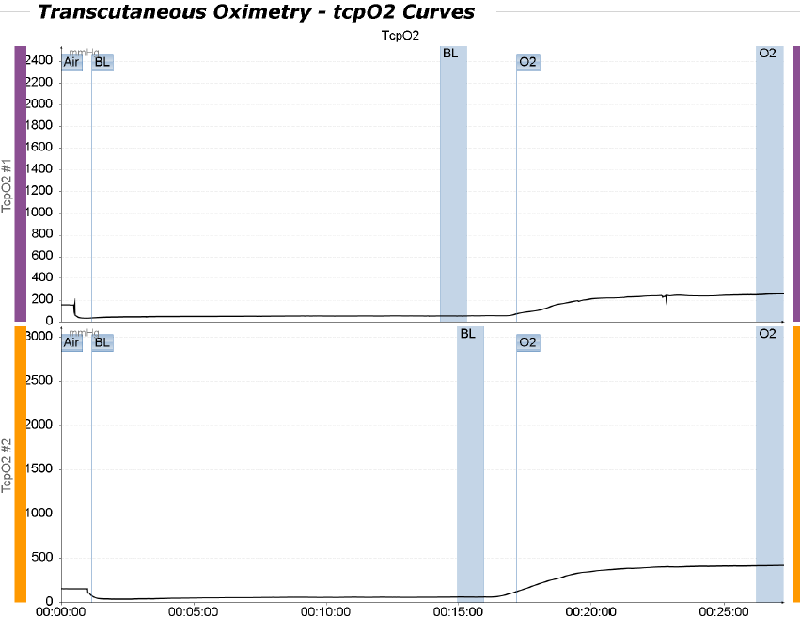 The American Medical Association has adopted a resolution opposing the unsafe use of so-called “mild hyperbaric oxygen therapy” in “mild hyperbaric facilities.” The policy D-270.986, adopted 26 July 2022, was initiated by the Undersea and Hyperbaric Medical Society and represented by UHMS Past President Dr. Laurie Gesell, an active practitioner of hyperbaric medicine and a member of the House of Delegates (HOD), the legislative and policy-making body of the American Medical Association.

The resolution, which can be found here, reads:

Our AMA: (1) opposes the operation of “mild hyperbaric facilities” unless and until effective treatments can be delivered safely in facilities with appropriately trained staff including physician supervision and prescription and only when the intervention has scientific support or rationale; and (2) will work with the U.S. Food and Drug Administration and other regulatory bodies to close facilities offering “mild hyperbaric therapy” until and unless they adopt and adhere to all established safety regulations, adhere to the established principles of the practice of hyperbaric oxygen under the prescription and oversight of a licensed and trained physician, and ensure that staff are appropriately trained and adherent to applicable safety regulations.

As noted by the AMA, testimony on this issue was unanimously supportive of the resolution. Numerous safety concerns were noted regarding these facilities offering “mild hyperbaric therapy,” such as inappropriate targeting of vulnerable populations, inappropriate dosing and delaying patients seeking proper treatment.

In a July 26 release entitled “Hyperbaric Oxygen Therapy: Get the Facts” the U.S. Food and Drug Administration cleared the use of hyperbaric oxygen therapy (HBOT/HBO2) for the treatment of several conditions. The release further states: “If your health care provider recommends HBOT, the FDA advises you get the treatment at a hospital or facility that has been inspected and is accredited by the Undersea and Hyperbaric Medical Society.”

The agency advises that individuals seeking hyperbaric oxygen therapy check with their health care provider to make sure they are pursuing the most appropriate care, noting that some facilities operate outside recognized FDA guidelines. “The FDA is aware there are some hyperbaric oxygen treatment centers promoting hyperbaric oxygen chambers for uses that have not been cleared or approved by the FDA, such as treatment of cancer, Lyme disease, autism, or Alzheimer’s disease.”

The UHMS has expressed concern over the use of unsafe and misleading practices in hyperbarics. In January 2017, the Society issued a warning against the use of low-pressure fabric hyperbaric chambers. Revised in 2018, the statement can be found here: https://www.uhms.org/images/Position-Statements/UHMS_Position_Statement_LP_chambers_revised.pdf

FDA-cleared conditions to be treated with hyperbaric oxygen

Taken from MedWatch, The FDA Safety Information and Adverse Event Reporting Program, the FDA has cleared hyperbaric oxygen therapy for treatment in these disorders:

One of our team will be in touch with you shortly.

We use cookies on our website to give you the most relevant experience by remembering your preferences and repeat visits. By clicking “Accept All”, you consent to the use of ALL the cookies. However, you may visit "Cookie Settings" to provide a controlled consent.
Cookie SettingsAccept All
Manage consent

This website uses cookies to improve your experience while you navigate through the website. Out of these, the cookies that are categorized as necessary are stored on your browser as they are essential for the working of basic functionalities of the website. We also use third-party cookies that help us analyze and understand how you use this website. These cookies will be stored in your browser only with your consent. You also have the option to opt-out of these cookies. But opting out of some of these cookies may affect your browsing experience.
Necessary Always Enabled
Necessary cookies are absolutely essential for the website to function properly. These cookies ensure basic functionalities and security features of the website, anonymously.
Functional
Functional cookies help to perform certain functionalities like sharing the content of the website on social media platforms, collect feedbacks, and other third-party features.
Performance
Performance cookies are used to understand and analyze the key performance indexes of the website which helps in delivering a better user experience for the visitors.
Analytics
Analytical cookies are used to understand how visitors interact with the website. These cookies help provide information on metrics the number of visitors, bounce rate, traffic source, etc.
Advertisement
Advertisement cookies are used to provide visitors with relevant ads and marketing campaigns. These cookies track visitors across websites and collect information to provide customized ads.
Others
Other uncategorized cookies are those that are being analyzed and have not been classified into a category as yet.
SAVE & ACCEPT
Powered by